Purely Hot won 12 races at distances from 5½ furlongs to 1 1/16 miles during her four-year career, capturing the Whimsical (G3) at Woodbine and finishing second in the Preque Isle Downs Masters (G2). She is an 11-year-old daughter of Pure Prize out of the winning Kissin Kris mare Wood Not. Her second dam, Wood So, was a multiple graded stakes winner of more than a half-million dollars.

Eight Rings, Purely Hot’s colt by Empire Maker, has won two of his three races at two, among them a six-length victory in the American Pharoah (G1) at Santa Anita on Sept. 27, to rank him among the leading contenders for the Breeders’ Cup Juvenile. Consigned by Taylor Made Sales Agency, agent, Eight Rings sold for $520,000 at Keeneland’s 2018 Sept Yearling Sale to SF Bloodstock/Starlight West.

Union Rags was represented by two yearlings that sold for $1 million each at Keeneland’s recent September Sale, where he ranked among the top 10 sires by gross.
“Keeneland is excited to have the opportunity to showcase this lovely Grade 1 producing mare who is in foal to a top stallion,” Keeneland Vice President of Racing and Sales Bob Elliston said. “The success of Eight Rings makes Purely Hot a highly prized offering who will attract attention from buyers around the world.”

"Adding Purely Hot was a massive addition for our consignment. She gives me the same feeling as the dam of American Pharoah when we sold her at the end of his 2-year-old campaign.”

“We are excited to offer another exceptional broodmare in Purely Hot. Two years ago, we sold the dams of four Grade 1 winners at Keeneland and hope to replicate their success.” 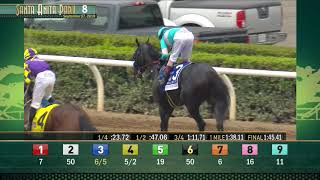 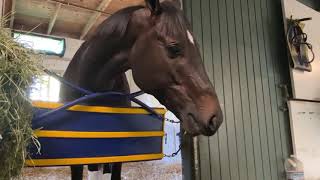 Eight Rings at the 2019 Breeders' Cup