HIP NO.43 | CONSIGNED BY Taylor Made Sales Agency, Agent CCXVII

Ollie’s Candy has four wins, three seconds and a third in nine career starts for earnings of $476,151. A highlight is her game triumph in the Clement L. Hirsch (G1) at Santa Anita in July.

After winning her first two starts on an all-weather surface, Ollie’s Candy successfully graduated to graded stakes company, defeating top fillies in the Summertime Oaks (G2) at Santa Anita in her first race on dirt and her first attempt at two turns. She displayed her gameness in that effort when she hooked the pacesetter and engaged in a duel through the stretch to prevail by a neck.

Ollie’s Candy next was a close second on turf in both the San Clemente (G2) and Del Mar Oaks Presented by The Jockey Club (G1) at Del Mar. She overcame challenges in the 1-mile San Clemente. In a testament to her athleticism, Ollie’s Candy started from the outside post, was forced to go wide in the first and second turns and still rallied from far back in the stretch to just miss at the wire.

Following her runner-up effort in the Wilshire (G3) at Santa Anita, Ollie’s Candy was an emphatic winner of the Clement L. Hirsch when she battled back to regain the lead and score the victory.

“She is a really nice filly who ran in some big races (at Del Mar) last year. She ran a good race (when second on turf in Wilshire-G3) at Santa Anita, came down here and had a bullet work over the track, which showed me she had an affinity for the dirt. A lot of Candy Rides (ARG) can run on any surface.”

Grade 1 winner on dirt and graded stakes placed on turf.

First or second in seven of eight career starts. 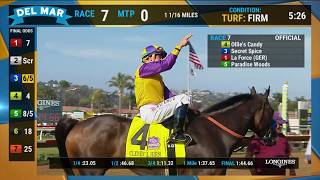 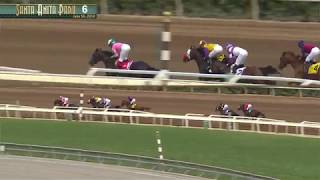 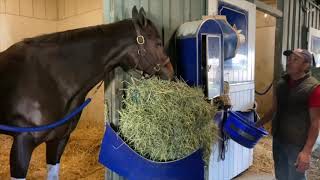 “I think it was (her best race). We were just very proud of her – the way she ran, the way she finished, the way she was able to overcome. It’s pretty rare (for a horse to overcome those types of challenges), but it’s what the really good ones do.”